Can’t We Just All Get Along? 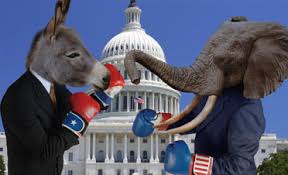 Are you as disgusted as I am with Congress?  According to a recent nationwide Gallop poll, congressional approval ratings have been hovering at a record low of a whopping 13% -18% since last August.  Put another way, 82% to 87% of respondents disapprove of the job Congress is doing.  How many traffic accidents would there be if a traffic light failed to properly operate 87 out of 100 times? Or how long would a restaurant be in business if it made a mistake on your order 87% of the time?  It would be intolerable!  People would march on city hall to fix the traffic light and the restaurant would have no patrons in its seats.  An interesting phenomenon is that while we hate Congress, we generally hold a high regard the job of our own elected representatives are doing individually (individual congressional approval ratings usually hover around 50%).

The thing that frustrates so many is that Congress just can’t seem to get anything done.  The partisan bickering and polarization seems to halt every piece of legislation intended to fix a problem that has beleaguered our country for years.  From the budget, to out of control prescription drug costs, to threatening trade tariffs, to fixing our broken healthcare system, it seems the extreme left and extreme right factions of each party hijack every piece of legislation.  Congress seems to lack any form of decorum to get along.

Flashback five decades… as a young boy I received board game for Christmas entitled, “What Do You Want to Be?” It was a game that helped one explore to possibilities of dozens of careers.  There was a teacher, a lawyer, an athlete, a store owner and among other professions in the game, a statesman.  I recall asking my mom, “What is a statesman?”  She explained that a statesman is a person who was elected by the people to represent them at our state or national capitol.  She went on to share that their job was to work with others who have different ideas to come to find common ground, share ideas and come up with the best laws possible. As I think about the title of statesman and not politician, I am convinced that what we currently lack in Washington, D.C. is statesmanship.  That is until a recent trip to our nation’s capital with a professional trade association to flood the halls of Congress to talk to our legislators about health care issues.

During our briefing, six-hundred of my colleagues listened to Representatives Josh Gottheimer (D-NJ) and Tom Reed (R-NY).  They have formed a coalition in the U.S. House of Representatives called the Problem Solvers Caucus, made up of House members that sincerely want to work together on a bi-partisan basis.  This group has an interesting make-up.  There must always be equal members of both sides of aisle – currently there are 24 Democrats and 24 Republicans. They also agree not to publicly or financially support an opponent of other caucus members so that the upmost trust can exist between them.

The caucus members have agreed to vote together for any policy proposal that garners the support of 75 percent of the entire group as well as 51% of both Democrats and Republicans in the group. They meet together weekly to discuss commonalities and legislative ideas that solve problems.  While either side may only agree on 80% of the solution the other side has to offer, through compromise they are working on bi-partisan solutions, often at the displeasure of their party’s leadership.  It’s was refreshing and exciting to see that 48 of the 435 members of the House of Representatives were committed to bring back old fashioned statesmanship, the kind of bi-partisan cooperation that existed between Senator Orrin Hatch (R-UT) and Senator Ted Kennedy (D-MA) who passed so many pieces of landmark legislation when they worked together.

The Problem Solvers Caucus have been working on some exciting solutions to some of the problems that have been at a stalemate for decades.  They just want to do what they were elected to do and find solutions to help move our country forward.  Let’s hope their ranks swell to hundreds of elected members of Congress and that it will also catch on in the Senate. It is encouraging to see that Congress can once again exercise statesmanship and return to a governing body that can get things done.